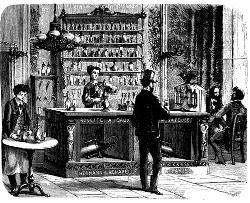 Spread the love
Police Inspector Barbara Cole first appears in Raven's Tears and her story continues throughout the Raven & the Iris Series. In this series of shorts we go back in time to Barbara's preparations to become a police detective, and take a peek at what middle class life looks like in Cascadia.

It was six in the morning, or "four bells" as it was more commonly known, and it was a wonderful time to be in Edwards' kitchen. The heat from the cook-stove, a massive, five-hundred kilo cast-iron beast, felt extraordinarily good at that time of morning, and Edwards always kept the light crystals dimmed in the early hours.

"Morning, Miss Barbara. You be up early," he said, greeting me as I came in. Edwards was our one and only domestic servant, or "servant of all work", as it was known in the trade. He headed over to the stove to pour me a cup of coffee while I plopped my sleepy butt in a chair at his work table.

"Meeting a fellow student for breakfast before studies," I mumbled.

He shoved a steaming mug of seasoned coffee in my direction.

"Thanks." I tossed him a sleepy half smile. Since I was studying independently, meeting students already in school was about the only way I had of getting inside information on exactly what I needed to know to pass the police academy entrance exams. Meetings had to be either before or after classes for the registered students, of course, so today it was coffee and yawns at four bells.

"Good mornin' for it, Miss," Edwards replied cheerily. "Snowed last night. First good snow since WinterFest. Should be nice and quiet and pretty out."

Perhaps, but he didn't have to go out in it, I thought as I sipped my coffee. Everything that moved, wagons, carriages, horse buses, and hansoms had long ago replaced wheels with runners for the ice and snow, and the horses were wearing their sharp, winter shoes. Fortunately, I wasn't reduced to riding the bus. We were well-off enough for me to hire a hansom cab for my journeys to and from the school library, but a heated carriage was out of the question even though the ride was over an hour long.

"I hope so," I said, sighing a little over my steaming mug.

"Like a sweet roll a'fore you go out? Put the leftover ones from yesterday in the warmer first thing this mornin', I did," he said, beaming, and headed for the small warming oven above the stove top. "There's hot, melted butter, too."

A quarter of an hour later, overcoat, gloves, muffler and hat all in place to ward against the cold, and with my book bag slung over my shoulder, I was standing in the fresh, frozen snow and under the clear skies hailing an early morning cab. This was early Tuela, so the magitech street lamps were still bathing the dark, quiet city in their bright, golden light. Even on the main street, over a block away, the sound of grating runners and crunching horses hooves was distant and soft. Edwards had been right. It was a quiet, pretty, Fernwall morning.

It was also the time of morning when there were only two kinds of cabbies about: Those who were cold and tired because they were finishing their shift; and those who were fresh and alert, but just coming on for the morning rush. This made hailing a cab a bit of an ordeal, and this morning it required a full ten minutes of standing in the cold before I could get one to stop.

"Blue Jacket Tavern," I told the driver as I handed over the fare, jumped in, and snuggled under the blanket provided for the frigid, hour long trip. The Blue Jacket was a full eleven kilometers from the potting shop. That was a shilling for fare, plus another couple of pence on the other end of the ride for the expected tip. Breakfast would cost about another shilling, as would the ride home. Today was going to be a dreaded three shilling day. I tried to avoid them, but despite my best efforts they were becoming more common.1

The eastern sky was growing pale, and the Clocktower was in the middle of ringing out six bells by the time my cab halted across the street from Fernwall's impressive Police Headquarters building. Behind it was the Police Basic Training, or PBT building, which also housed the Inspectors' Academy. I paid the driver my tip and dodged other hansoms and one police wagon to cross the street, hurrying to get out of the cold.

The Blue Jacket Tavern was famous for never being "off duty", so of course it was open, and the lights were kept dim for the midnight shift. This was still mid-shift at the cop shop, so there were very few patrons scattered about the old oak tables and chairs. I was looking for Merrida Caulders-Smith, a war orphan who had been lucky enough to be fostered by a wealthy mercantile family. She had earned her all-important university degree from Riverside, and with that had slid right into her academy enrollment. Having lived through the worst she was  generous almost to a fault, and so had offered to help me prepare myself for the ordeal she had managed to escape: The dreaded entrance exams!

I saw her wave at me from a table across the room. Her bright smile lit up the whole tavern. "You look cold," she quipped brightly as I approached, and slid a steaming mug of hot chocolate in my direction as I sat down. "Just ordered it, but you look like you need it more than me."

"Traps are cold," I replied, clutching the hot mug gratefully.

"I should have thought. I could have come around and picked you up. Pop's carriage is heated, you know." She poured as much noble snob into the statement as she could muster—which, thankfully, wasn't much.

"Next time," I assured her. "So, what have you got for me?" The server stepped up. "Just a sausage roll and coffee, thanks." I turned back to Merrida, whose grin was about to split her freckled face. She plopped a leather satchel onto the table. 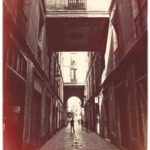 "Notes and worksheets and pretty much everything but the text books for PBT-FOT—" in other words, the version of Field Officer Training they taught in basic— "arrest law, basic traffic, and basic MERC." In post war Fernwall, many veterans had turned to mercenary, paramilitary organizations, and they were everywhere. Dealing with them wasn't easy, which is why it had become a whole course of study. "This should keep you busy for awhile." Merrida sat there grinning as my eyes widened.

"How?" I asked, astonished. I knew I was close. So close, in fact, that I had set an exam date earlier in the week. But I also knew I was in a hurry. If I was deluding myself about how much I really knew, this material would go a long way toward helping me find out.

The server slid a plate onto the table. Merrida snatched the steaming sausage roll from it and grinned. "Bring her another," she told the server. "I'm paying." Then she looked at me, still grinning broadly. "A friend of a friend—and money, of course."

"You paid for all this?" I gasped. "Merrida, that's cheating!"

"No it's not." She licked the grease off of her fingers, her pale eyes twinkling like diamonds. "There's nothing in there that's classified or secret. It's just private property that I bought and paid for, and now I'm giving it to you. I thought it was rather clever, actually."

I hadn't thought of it like that, but she was right. It wasn't like this was a contest or something. I was trying to learn, same as everyone else who wanted to carry a badge. "Umm… Thanks, but you know I can never pay you back, right?"

I was still rather flabbergasted and searching for words when my sausage roll arrived.

"What's wrong?" Merrida asked just before popping the last of her sausage roll into her mouth. She looked at me expectantly while I struggled not just for words, but with a moment's doubt that I could trust her with family confidences.

"My choices have put my family under great stress," I began slowly, staring down at my untouched, steaming sausage roll. "They wanted me to go through basic and put in my time as a blue jacket, you know. And I know why. It would be a cheaper and surer track to an inspector's desk than this." I nodded toward the satchel and picked up my breakfast.

"It's also fucking boring!" Merrida snorted. "I can't even imagine it. Someone with your quick wits and sharp eye, a beat cop?"

She had me pegged. I had been fighting a rearguard action against boredom my whole life. I huffed a half smile. "It's why I decided to go straight to inspectors academy. But for my family—I mean, we're in the two-fifty club, okay?2 It's costing my family a lot of money."

"So we don't let you fail," Merrida said confidently.

"Easy for you to say." I said, but couldn't help chuckling. Merrida's eyes were twinkling merrily again as we went on to talk about other things. We talked shop, we talked about personal things like our families, and dreams for the future beyond the badges for which we studied. I got to know her a lot better, and by the time we parted to begin our days, I felt I had done something rather rare, for me. I'd made a new friend.

Next time: Mom finds out!

Don't forget to subscribe to The Menelon Gazette to stay up-to-date with all our offerings!