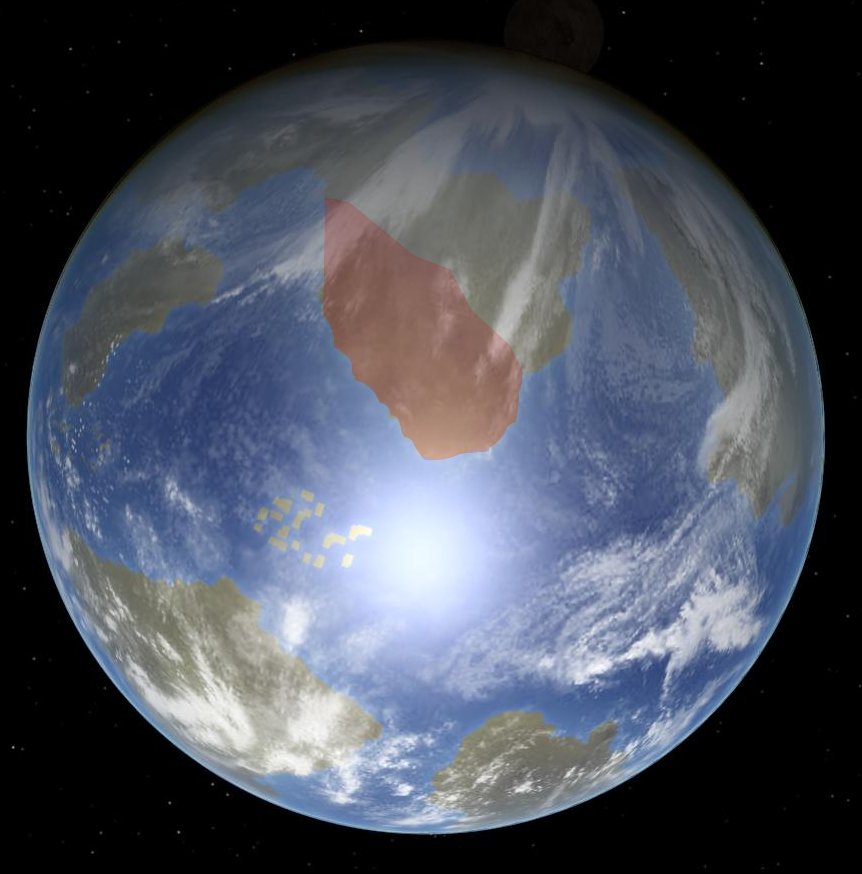 Introduction/Background: The kingdom of Cascadia occupies the south-eastern quarter of the continent of Korak. The heart of the kingdom is the Caspian River and the wide valley through which the river runs. Formed during the last ice age, locals consider the river valley to be the "breadbasket" of the kingdom.

Even today, broken as it is, there can be no doubt that Cascadia is the super-power of the continent. It was the only modern economy left intact during The Great War, and was therefore left to supply the needs of a global army, pretty much all on its own, for nearly fifty years. Prior to the war, it was a simple monarchy. Before monarchy, it was a collection of semi-independent regional powers—duchies and earldoms with a smattering of free cities like Fernwall—just as it is today. In its original incarnation, however, The Allied City-States of Korak (ACSK) were part of Cascadia, both in its first city-state incarnation, and the early centuries of monarchy.

Today, Fernwall is the world's undisputed financial capital of the world. It is Cascadia's largest city, and the world's second largest city (Shanakara in Sudaan is the largest). It is said that, if it can be bought, it can be purchased in Fernwall.1  That is especially true of financial instruments. The Mercantile Exchange (aka “The Merc”) is the largest stock exchange in the world, and its commodities exchange remains the model for agricultural and raw materials futures pricing.

Geographically, Cascadia's boundaries run from roughly 55˚N latitude in the north, to 40˚N latitude in the south, making it a country with mild summers and wicked winters in its northern and eastern regions, while the south basks in a more temperate climate moderated by the Gulf of Korak on its western shores, and the Istani Ocean on the other. The south country, which Cascadians call “the wine country,” is home to uncounted acres of vineyards and orchards, fields of melons and artichokes, lettuce, cucumbers, and beans. The south grows a particularly mild, gluten rich wheat loved by pastry chefs throughout the Old Kingdom.

In the center of the country (at 50˚N, more or less) lays the Caspian Valley, down the middle of which runs the Caspian River, the life blood of the City of Fernwall. There, a harder wheat must is grown, as is rye and barley and apples of every kind imaginable. Massive poultry farms, dairies, and auction yards cluster near the river bank at barging stations for a hundred kilometers up river, competing for space with the stock yards, wood lots, carpenters shops, smithies, and farriers that service the teamsters, coaches, and mail rider's right along with the inn and tavern keepers. Extra acreage is put to work growing cash crops such as flax for linen and paper. Waste land is stocked with goats and sheep for milk and wool. Further north, harder grains are grown, as are root crops such as potato and yam. Timber, too, is found in the north and the west—and Cascadia is anything but poor when it comes to other natural resources such as coal and iron, silver and gold.

Politically, the City State is slowing migrating back towards monarchy. The constitution drawn up after the revolution includes provision for a head of state. It both describes and circumscribes that head of state's powers; but it does not name the head of state “monarch,” and the country is not yet ready to make a leap. The “republicans” still hold, if not a political majority, a popular one, and the “royalists” are being patient, biding their time. Everyone knows a head of state will be needed soon if Cascadia is to compete on the post war world stage. The arguments aired in the papers each day have more to do with form the head of state should take, than the question of whether there should be one: Should the head of state be an absolute monarch in Vin-Nôrëan tradition, or a parliamentary monarchy after the Vin-Llamázi tradition; or should Cascadia follow the Surmeidän model and elect a prime minister at regular intervals; and if the head of state is to be elected, just whom should do the electing? Those are the questions.

Only time will tell how the Cascadians answer.

For the anglophiles among our readers, we recommend caution in interpreting social nouns. The English definitions are often not accurate, when applied to Cascadia, who in many ways would identify more with the French, than the English, when it comes to defining, and protecting, their nobility. An aristocrat might be a member of the gentry, or not, but a member of the gentry will always be considered an aristocrat. The “gentry”, as the Cascadians use the term, are those of noble birth. They are simply assumed to have the propriety and manners genteel breeding produces (however illogical that might be). An “aristocrat”, on the other hand, may, or may not be of genteel breeding. Money or no—and £10,000 a year is considered the entry level income required to be welcome in aristocratic society—if one is merely rich, the manners of the genteel born are required, if you expect to hob-knob with Cascadia's rich and powerful.

Nobility, on the other hand, is a matter of birth, in the mind of a Cascadian. Not land, birth. Thoroughbred race horses, the argument goes, are the very pinnacle of racing horse flesh because they are carefully bred to keep the bloodlines pure. So too must the nobility protect the bloodlines of their houses, and of the gentry itself. This whole idea seems rather idiotic after the war, of course, as many of the gentry's “fine bloodlines” were wiped off the face of the planet. Claims to estates are being granted to distant relatives of the hereditary families whose blood ties are measured in minute fractions; but that has done nothing to curb the custom, and practice, of differentiating between the merely rich, and the merely noble.

Another term very specifically defined in Cascadia is the noun “peer”. To be a “peer of the realm” in Cascadia means to sit in the House of Lords. To sit in the House of Lords, one must be either a duke or a greater earl. It is no accident that the peers of Cascadia were all kings in their own right, prior to monarchy, and are now very close to being kings again, on their on lands. Traditionally, there are twelve seats in the House of Lords. Circa 580, only ten of those seats are occupied, as neither the duchies of Crowley nor Enselford still exist.2 Crowley's lands are being governed by the new Earl of Auberon, who would, under normal circumstances, be Crowley's vassal. Likewise, Enselford's lands are being governed (poorly) by the Earl of Camrose, the liege of Angelique Blakesly, Baroness of Carlisle.

If you're neither a rich aristocrat nor a member of the gentry, then you're a commoner, one of those who actually has to work for his or her daily bread. In the old days, that would have been the end of the story. Today, while it's still that simple as a matter of function, the increased economic complexity of modernity has split quite a few hairs, giving a granularity to “the lower classes” that didn't exist in pre-war times. To be a “commoner” is no longer, by itself, a derogatory. One can be a commoner and be a member of the “upper class”, the “upper middle class”, the “middle class”, or the “lower middle class”. (And of course, one can also simply be “poor”.) While the aristocracy might not consider those distinctions to be all that important—at least, not until your income starts getting close to the magic £10,000 number—for everyone else, it's very important. Income determines where you live, who you associate with, what size townhouse you can afford, how many servants you have, what your social obligations to them are (hint: they increase with your income level); in other words, for the very same reasons wealth is important to the aristocracy, it is also important to the common folk. It determines your place in society, and your obligations to those less fortunate than yourself.

Finally, at the very bottom of the social pyramid are the slaves. As slavery is a major topic in Raven's Tears, and since, as the book opens, Sir Vincent Sultaire, a member of the gentry, is introduced as a slave, it deserves special mention.

First, it should be noted that, as a percentage of the population, there aren't very many. Unlike the American South in the 19th Century, you won't find fields full of slaves, plantation style. It doesn't work that way. In point of fact, you have to work rather hard to become a slave in Cascadia, and even then, unless you've committed a capital crime, you're only going to be a slave for a judicially fixed period of time: i.e. the term of your sentence. In addition, with the exception of “life slaves”, those serving life sentences for capital offenses, slaves have rights3 which, if breached, can put the slave owner in a collar as well. Which is why, in Raven's Tears, you often find the term “indenture” used synonymously with “slave”.

Quite simply, indentured service is used as a vehicle for punishment of crimes, rather then imprisonment, which is seen as a waste of both labor and money. Why put someone in a cage, where you have to pay to feed, house, and guard them, when you can sell them at auction, and have their labor put to use in society? The later, Cascadians believe, is a “win, win” for society and government. The downsides, even given the few legal protections those indentured have, should be glaringly obvious. It is not considered “permanent harm”, for example, for a brothel to buy a slave and make them work as a prostitute. It is not considered “permanent harm” to buy a slave, keep them in the stables, and work them from dawn until dusk, seven days a week. Compare this treatment to Vincent's cushy post as a police inspector, and you begin to see the reasons for the resentment surrounding his indenture. You also get an idea of how terrifying being convicted of a crime and sentenced to a term of indenture can be.

Obviously, gaming the auction system is common for those with the means to do so.