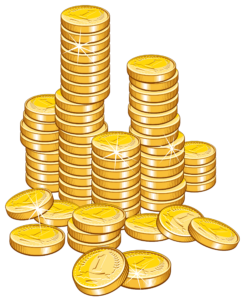 On Menelon, money and credit work a little differently than they do in our modern times on Earth. In general, instruments that function as units of exchange come in three forms:


Because Menelon still uses commodity money, they have no annual inflation rate. Saving, for the average person, usually means tossing extra coins in a jar or box and hiding it away. Folks on Menelon know, just as our (great) grandparents knew, that the money they save today will buy just as much in twenty years as it does today. What price fluctuations there are come from natural forces or man made disruptions, not from engineered devaluation of the currency—though debasement does happen, as we'll see below.

So, while each country has its own coin, as they are all based on the weight and purity of the metals from which they are made, they are pretty much interchangeable. An ounce worth of coined silver is worth an ounce of coined silver, no matter whose face is on it, or which royal mint struck it.1 On the other hand, while debasement isn't currently much of a concern from the great courts of the post war world, pirates and organized crime syndicates are famous for debasing the coinage that comes into their hands. Yet another reason use of bank accounts may be increasing. For a small fee, the bankers willingly take on the risks associated with foreign exchange, coin clipping, and forgery, in addition to the above mentioned convenience of accepting all forms of credit instruments.

Because Cascadia was the only country to have an economy that remained intact (though not unaffected), during The Great War, and because, in our article on value and prices, we had to make use of it, it seemed only natural that the Cascadian Pound be an analogue to the 19th century British Pound Sterling; but the Cascadian pound is not the oldest sterling based currency. That honor belongs to the Vin-Llamázi launa. Cascadia was founded primarily by Vin-Llamázi immigrants, so the Cascadian Pound was patterned after the launa. The Balcheri silver link, on the other hand, is an analogue to the Vin-Nôrëan mark. The Sudaani ail is the newcomer. It was created after the war. Not surprisingly, as Sudaan's two largest trading partners are Cascadia and Vin-Llamáz, the new currency is structured similar to the pound and launa.

Above, credit was listed as a form of currency. This is because, on Menelon, many credit instruments are fungible. A check written by a prominent, well respected business person or noble will typically pass through many hands in the local community before it is presented to the issuing creditor for redemption. Obviously, this gives the idea of "credit worthiness" an entirely different level of meaning than we're used to in our world. Promissory notes issued by banks, governments, large companies, and of course, the titled nobility, have very high acceptance rates that can extend well beyond their local area. They can, therefore, charge premium rates of interest for the use of their money, and in turn pay very low rates to borrow.2 Smaller companies and the lower nobility may only have their notes accepted within their community. But even so, if you're a business in good standing, your promissory notes will probably be accepted by those vendors with whom you typically do business and those with whom they do business, which is all you need.

As a practical matter, however, most businesses and the wealthy usually transact through a bank, so in that sense, the promissory note is very similar to a modern bank check issued against a running balance. You write the promissory note, which then wonders around like money for a few months (or years), until it finally lands back at the bank who manages your accounts, and they “cancel it out” by paying the face value out in coin or banknotes.