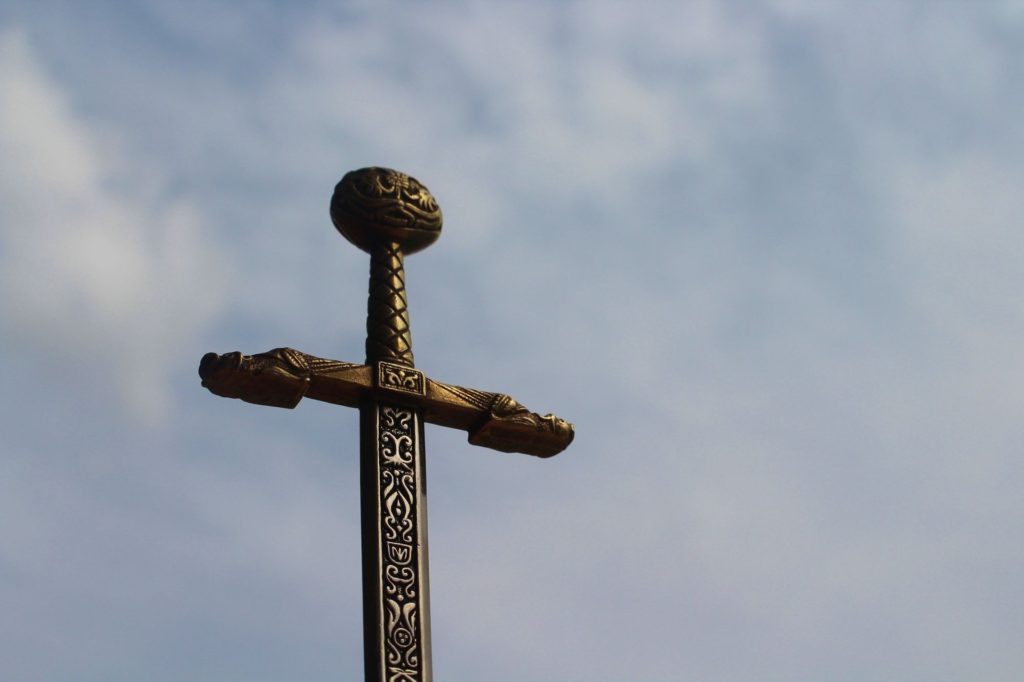 Updated 2/6/19. As you can see, this article is once again under revision - keep checking back for new information!

The Guardian Paladin consists of a twin or dual godhead which is usually figured as "male/female, but in the thousands of years of new religious texts and their interpretations that dual nature is understood to be the partnership and  marriage of opposite forces in service of the greater good. The visions of the Lord and Lady of Paladins were experienced by Kharsat the Sainted during what is known as the" Undermountain migration" of the Medini people (see below) in their origin myths, and form humanity's core knowledge of this divine being who led them out of the darkness and into the land that was to be their new home.

The religious beliefs of the Guardian Paladins have their origins in the pre-history of Menelon, emerging into history on northwestern Sylantia along with a warlike and aggressive strain of humanity known as the Medini. They had initially settled in what later became Surmeidän and had so brutally and efficiently killed off the monster and demi-human threats that the elves (who had their own ways of managing this early and particularly savage race) arranged with the dwarves that the most warlike of the Medini would be offered a challenge: Take the Dark Passage under the mountains, guided by the dwarves - and if they survived, they would emerge in a land that they could make their very own.

The journey through the underdark and the labyrinthine cavern-cities of the dwarves took some time. The Medini were forged and tempered by the challenges they faced on this great migration into the Sylantian people most Menelonians are familiar with, today. They emerged from the caves in the foothills bordering the high mountain desert of the Plains of Isen with, among many other things, a fully functioning moral and ethical code for every member of society from the serving class all the way up to the izvär, or sovereign. They perfected these codes as they conquered and settled the Holy Land and carved the great fortress cathedral and holy city of Par-Isen out of a mountain.

The core of Paladinism is structured around a roughly pyramidal hierarchy with no surprises. The monarchs are at the top, with the greatest responsibilities and duties, and ideally, also the most honor, respect, and power. With each lower rung, duty and responsibility to the society decreases, as does honor, respect, and power until at the lowest levels of society one has very little duty and responsibility other than for oneself and one's family. It should be mentioned that all Paladins pay lip service, at least, to the teachings that grant even the lowest members of society a baseline level of respect, though like all ideals, it is sometimes noticed more in the breech than in the actual observance.

Hence, adherents of the Guardian Paladin church are usually viewed as understanding the workings of rulership in society, of good governance and stewardship of the lands and people for which/whom they are responsible. Over time, they've become somewhat synonymous with the feudal hierarchies they developed, and with the arrogance that accompanies a racial entitlement to rule. At its heart, however, Paladinism began and evolved as a way to ensure that all members of society were cared for and had a productive place within it.

Familiar forms of address for clergy. These are from D'waanese, the native language of Vin-Nôrë. Since we use American English to write our stories, the common English words for these are often used:
Church offices:
Miscellany:

In the Shadow of the Mountain Cathedral

After leaving Par Isen, the Paladin church conquered the lands to the north and the south, naming them the kingdoms of Vin-Nôrë and Vin Llamáz. In Vin-Nôrë the Guardian Paladin is  worshiped by the ruling class, who also give financial support to the Valïan church as the preferred religion of most of the serving classes. The population of  Vin Llamáz opened itself to foreign trade much earlier than their northern cousins and thus has more diversity of, and tolerance for, religious choice. Most major cities have temples for Urilians, B'nachians, and Eldarians as well as Valïans, but the Paladins still hold most of the power in the kingdom.

The Guardian Paladin church spread to Cascadia on the continent of Korak in MCY [___], but shares divine ground with religions from all over the globe in Fernwall, the most cosmopolitan of cities, and the ruling class there is almost exclusively drawn from the ranks of Guardian Paladins.

Winterfest is a holy time of year, known as the Festival of Light in honor of the birth of the god Valïa by the Lady of Paladins. Each Paladin saint has a feast or fast day -- list to come.

On the night of the winter solstice Paladins celebrate the Undermountain origins of the Medini people with religious observances -- descriptions to come.